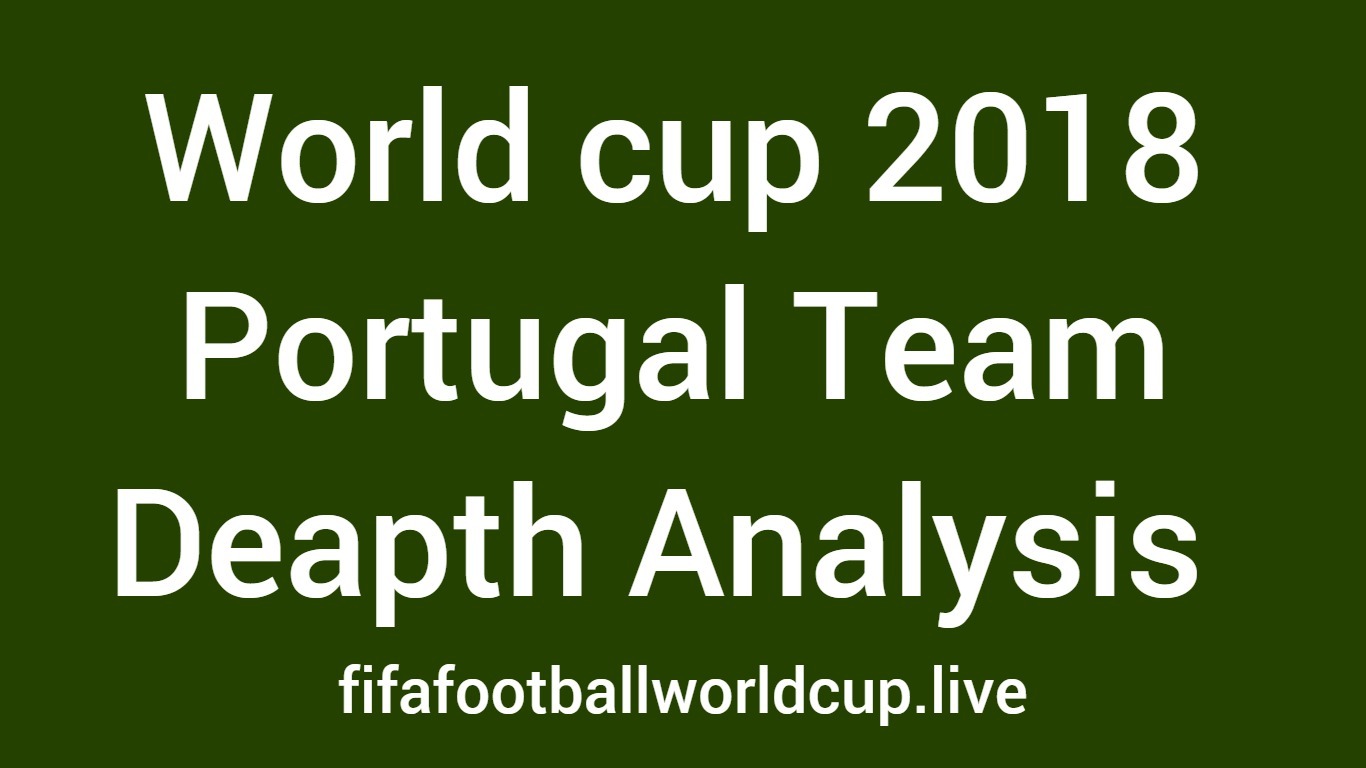 Having Currently Ranking 4th Spot in Fifa ranking and Continuously standing on the Top 10 in fifa ranking from the last couple of year team Known as “Big teams” status. Team always enter in almost every other tournament but failed to make a glory in fifa world cup tournament. Yes this is the past stats of the Portugal side who will be leading by the Popular Football stars of Cristiano Ronaldo. If we look at the current Fifa ranking where Portugal will be standing on 4th spot means they have to go even semi finalist in world cup if not became the champion. Team will be ready to make a glory in russia world cup which begin from the 14th june here i will share with you Depth analysis of Portugal side which give you exact information how they stand in the race for the football world cup 2018.

Here on this article we share with depth analysis of Portugal’s Football team in world cup 2018 with his Strengths, Weeknesses, Key players of the side, Recent form and brief idea about their big names for the Russia tournament.

If we look at the portugal side key players – best rosters then first name will be came on everybody’s mouth will be their captain and star footballer of Cristiano Ronaldo. Lots of liabity of the team will be pinned on his shoulders to play the role of finisher. Apart of him, Young Andre silve will be key players of the side in attack while in Midfield Adrien Silva, William Carvalho and Bernardo Silva roles are always important.

This 2018 Russia world cup will be the Seventh Appearance for the Portugal side and fifth consecutive for them as they miss out the 1998 world cup. Team who will be getting better form since the Cristiano Ronaldo debuted for them. However their best performance comes in the back to 1996 when they finished tournament at third which will be played in England. Their last best finish comes in 2006 world cup at Germany on Fourth position just behind to Germany, France and Champions Italy on that occasion. One of the surprise thing is their captain cristiano ronaldo has score only three goals for the Portugal in fifa world cup tournament so far. Thus this will be the best chance for him to change better statistic in world cup events.

Portugal’s Main strength is their front line as attack that has cristiano ronaldo in its rank is good enough to leave any defendce and that will be better for the likes of Ricardo Quaresma and Andre silva to come right and give their captain to support. Attack of them are not an easy task for any defence in the world cup. If looking the team line up then young defence which play a huge role in their counter attacks. If EURO success then team surely perform better.

Portugal who comes to world cup tournament with weakest benches as first choice players of Fernando santos will be out of the competition due to injury and this spot surely be bother for the line up. If we look at the portuguese side without their captain Cristiano Ronaldo then its emphasises as team players will be most dependent on their captain. Sidekick who will be play around the key man are the wekness of the portugal side and that will be costly for them in russia world cup 2018.

Having Drawn in Group B Portugal side in UEFA qualifiers round along with Switzerland, Latvia, Hungary, Andorra and three other island teams they done well and ended the qualification round with top of their group by earn 27 points and this will be much better goal difference the second best side of the group of Switzerland. In the Qualification round team only loses against Switzerland on 6th september 2016 clash. Now looking on the recent form then Portugal side manage to only one victory in the last five games which came against Egypt while draw 3 games against belgium, tunisia and usa. In the last five games they lost against netherlands with 0-3. Now they will be facing Algeria on 7th june in friendly before starting the world cup campaign against Spain on 15th june.

As we seen that Some big teams like usa, italy, netherlands will be missing out the qualification for the world cup 2018 is expected to full of surprise. Some small teams ready to make big impact and give their better in the world cup 2018. Portugal who have a easy game against Morocco and Iran in the group stage while challenge comes against Spain so Even they failed to get top of spain they will finished ahead of the Iran and Morocco so easily moves to round of 16 where they like to play either of Russia, Egypt or Uruguay and performance against him better will guided them to next round of Quarter final games. So after considering every part of and fixtures of portugal matches we expect that Cristiano Ronaldo side expected to finish 2018 world cup somewhere around 5th or 8th spot.

Portugal who have recently confirm 23 men squad for 2018 football world cup. Currently they facing the final friendly game against Algeria on 7th June before moves to world cup challenge. Portugal side who is drawn in the Group B so in the group stage they face to Spain, Iran and Morocco in the first round. Team who is ready to leave for russia where Portugal face first game against spain on 15th june at Fisht Olympic stadium. Their second group stage match against Morocco on 20th june at Luzhniki stadium before moves to last group stage match on 25 june against Iran at Mordovia Arena.