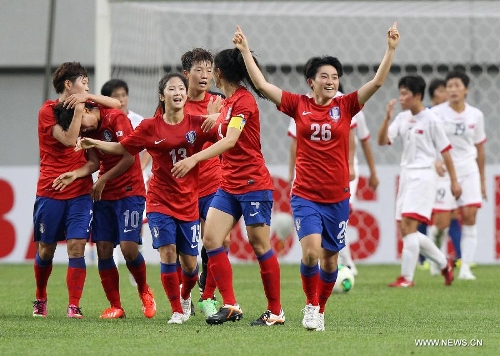 South Korea ladies football team will be secure their place in the upcoming 2019 Fifa Women’s World cup by finishing the Fifth place in the continental football tournament of 2018 AFC Women’s Asian Cup on 16th April.

Currently South Korea who is Ranking in the Fifa on 16th Place. They beat the 72nd Rank Philippines by 5-0 in the fifth place match at Ammman international stadium in jordan and confirm their place for the next france womens world cup.

The AFC Women’s Asian Cup, which features eight teams, doubles as the final Asian qualifier for the 2019 Women’s World Cup in France.

The top two teams from the two groups that reached the semi-finals were awarded the World Cup spots.

South Korea women’s team who is led by head coach Yoon Duk-yeo, will join Australia, Japan, China and Thailand to represent Asia in the 2019 Women’s World Cup tournament at france.