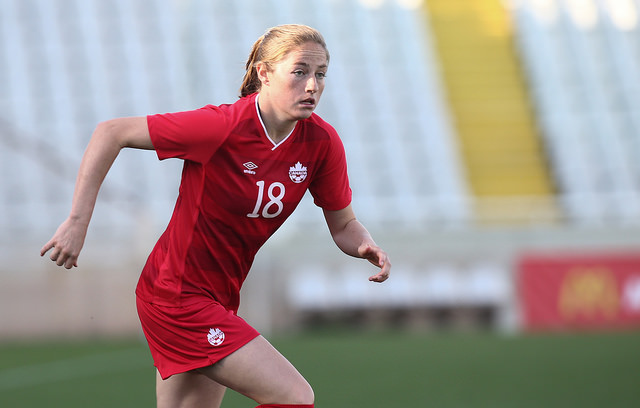 Star players of the Canada Side Janine Beckie Believes Canadian Women’s Football Team will be favorites to win the Upcoming Fifa world cup 2019 at France as team are with lots of potential to became the first time champions of the world cup competition. As per Beckie’s said, Canada who is preparing very hard for the fifa womens world cup and team will be going with right direction to became no. 1 team of the tournament.

“We do believe we’ll be the most prepared team at the World Cup and if you saw what our staff do day in, day out, you would have that belief too. We’re excited about France and we want to come home as Number one. Our ambition is to win the world cup and we’re going there with the intention of being Number-1. We have the ability, the structure, the players, the staff – everything you need,” Beckie said in the interview.

As per Women’s Fifa world cup Fixtures Canada who is drawn in the Group E so team to face New Zealand, Netherlands and Cameroon side in the group stage round. Beckie also said their Netherlands clash surely be toughest for his side while Cameroon and New Zealand Matches are challenging one.

“Netherlands are our toughest opponent. They won the Euro and have so many great players – from Lieke Martens to Shanice van de Sanden. Cameroon are a bit of a wildcard and it will be an interesting game for us. And New Zealand is a team that sits right in the middle and has good players. They’ll definitely pose us issues,” 24-year old Canadian forward quoted.

Currently Beckie who plays for the Manchester City.

“It’s a completely different experience football-wise and I wanted to be in an environment that would challenge me every day ahead of the World Cup. The game in the States is much more transitional and athletic and not based as much on possession (compared to Europe),” she said.

“Diana has had some injuries the last couple of years which has kept her in and out of camps but she’s a rock on our team and no-one works harder. When there’s someone that has over 200 caps and you haven’t played at a World Cup, you lean on those people.”

“And with Christine, there are no words to describe the value she brings – our captain and going to no doubt break the world scoring record. She wants to finish her career at No1 and she’s not seen Canada as a real threat to achieve that until now. We want to give her that as a thank you for everything she has done for her country,” Beckie said.

As per Fixtures Fifa Women’s World cup 2019 at France will be begin from the 7th June between the France and South Korea in the Opening clash.