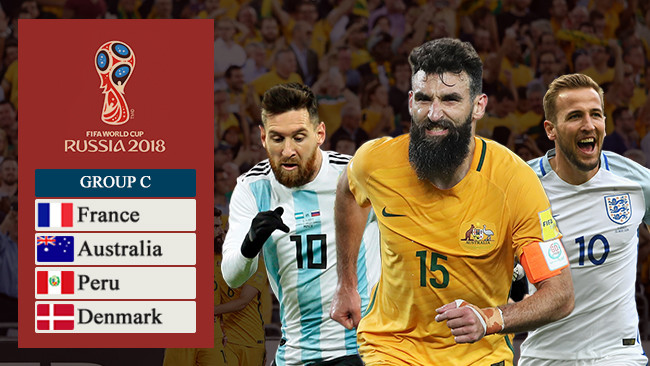 Check out here the complete information about Group C Teams, Their Schedule (When Matches Played) along with All 4 Teams prediction for the 21st Edition of Fifa world cup 2018 Russia tournament.

Australia : Socceroos who is the defending champions of the AFC Asian Cup and this is the Fifth appearance in the Fifa world cup tournament for them but apart of 2006 world cup where they ended on round of 16 their performance in other three tournament are not so good so team look to better performance this time.

Also see : Who will be better team from Fifa world cup 2018 Group A – Prediction

France : Champions of the 1998 world cup are look to other trophy this time as their line up are highly spirited. Recently they also runner up in the UEFA european championship so confidence of the squad are certainly higher.

Peru : Peru national football team who will be playing in the football worl cup after a huge game of 36 years as they recently played in 1982. This is 5th appearance for them in the Fifa world cup Tournament and team best performance was reach in Quarter Final in 1970.

After look at the all four teams performance France is expected to end on top of the Group and clinch the first spot of the Group C table.

Peru national football team who are playing in the world cup after a long time of 36 years so team surely look to better performance this time. They sarted poorly in the world cup qualification but but winning some crunch matches against Ecuador and Uruguay side. A part of some other results they goa a play off spot against the kiwis and they don’t disapointed fans by giving better performance.

Australian Side who is also known as Socceroos are struggle a lot in the qualification procedure so team might ended 2 or 3rd spot in the Table.

Which team you think will make thorugh to next round – Denmark, Australia, Peru or France share your thoughts on below comment section.