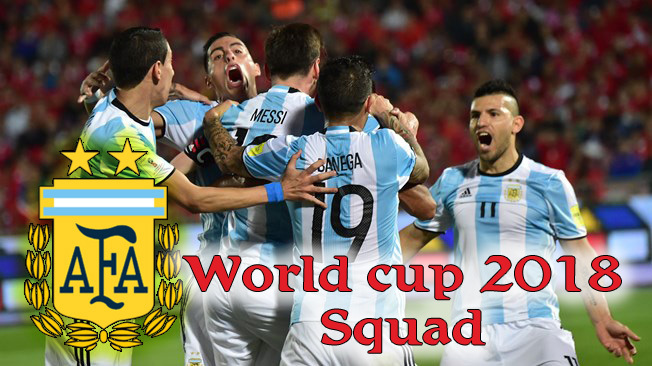 From the many times Argentina will be facing issue with goal keeper but for world cup they included Manchester united’s Serbio Romero to start with Nahuel Guzman and Geronimo Rulli will be back up goalkeeper of the team.  Javier Mascherano is expect to go by playing with defensive midfield role while two of the three (Lucas Biglia, Leandro Paredes and Ever Banega) should start along with Mascherano in midfield position and this will be depend on which System Argentina team will be using. Di Maria comes to play with 4-4-2’s variation. Argentina football team captain Lionel Messi will be start on the right side of three man attack along with Higuain or Aguero starting at centre forwards. for the left side a fierce competition between two of the great Paulo Dybala/Di Maria or even Angel Correa.

2014 Runners up Argentina will be drawn in the Group D in the 2018 Fifa world cup and in the group stage they will play against Nigeria, Croatia and Iceland.

Till Today confirm list of Squad and Players of Argentina Football Team are not announced by the Argentina Selection committee for the Russia world cup 2018. As per some sources we expect that Argentina world cup players list are announce 30 days ago prior to tournament start . check out below the expected Argentina 23 Man Squad for Football world cup.

On the Midway of world cup Qualifying round Jorge Sampaoli will be join to Argentina as a Head coach of the Side. Under their coaching Argentina managed to Qualify for the Russia world cup after difficult qualifying round. Sampaoli has been with team less then a year time. So Team will be looking to better performance in the football world cup under their coaching. if we look at the current players then Argentina are look solid in both department of Forward and Back. Recently Sampaoli guided Chile National side and bring Two copa america trophies so their experience surely help a lot to The White and Sky Blue line up.